To vote in Illinois, a person must be at least 18 years old, a resident of their district for 30 days and a citizen. Voters must register with the local election district at least 28 days before the election.

General elections are always held on the first Tuesday following the first Monday in November in even-numbered years.

Primaries are elections in which party members elect the candidates of their party. Three ways of nominating candidates used are convention, caucus, and primaries. The primary is the most widely used method. In a closed primary, voters on Election Day must choose one political party's ballot. Only Democratic candidates are found on the Democratic ballot. Republican candidates are found on the Republican ballot. Voters must choose only one ballot. In open primaries, voters receive the same ballot, which contain the candidates' names from all political parties. The voters do not have to declare their party affiliation in open primaries. Illinois uses the closed primary system. In the convention method, counties choose delegates to meet in a convention to decide party's candidates. In the caucus methods, party leaders select political party candidates for the ballot.

A person convicted of a felony or who is otherwise under sentence in jail loses the right to vote. This right is restored after the sentence is served.

Voters are sometimes asked not only to vote for candidates, but also to vote on public issues such as bond issues of some governmental body or change in the state constitution. A tax increase for a school is settled by referendum. 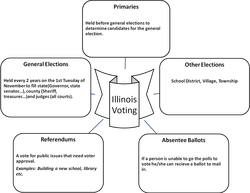 See if you have what it takes to run a county: Play Counties Work by ICivics